An experimental photographer and traveler Daniel Edward Allen described his notions on the aesthetic similarities of old photographs with classical paintings. He said he noticed during a project of taking photographs that looked like old photos but had new details like electric sockets on them, that we are so conditioned to look at pictures and see them as pure history. But as we know, most of the oldest photographs were staged, because there were no instant cameras and taking a picture took a longer time. From there, a question arises - how high is the truth value of such a photograph, taken 100 years ago?

The visual aesthetic rules that classical paintings follow, are:
1) The Rule of the Thirds. The Horizont must be set on the line of 1/3 of the picture
2) There should not be anything of importance set exactly in the middle of the picture. This would overwhelm the viewer and establish a visual unbalance.
3) If a person is depicted on the painting in close-up, they should be placed so that the viewer could see their neck and the top half of the shoulders. If any less is shown, the head seems disturbingly cut off. 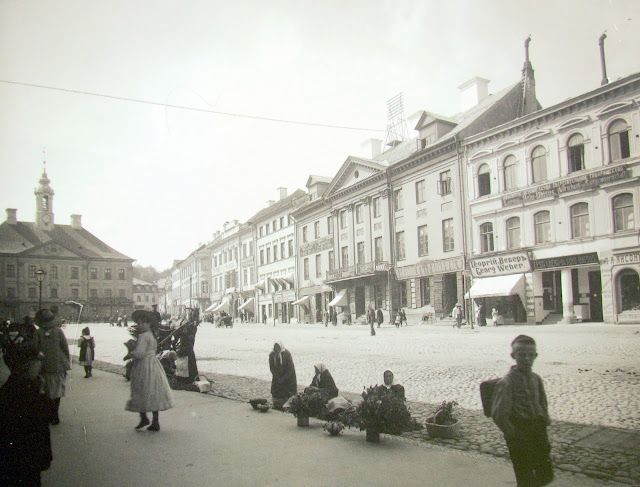 This photo by Johannes Pääsuke does look spontaneous at first glance, due to the people in motion, but if you look at it, it does follow all the rules of good photography. There are diagonal lines moving from the corner of the picture to the opposite corner, pointing at the most important detail on the photo (Raekoda). The border between the ground and walls is set exactly on the 1/3 line of the picture and there is nothing significant exactly in the middle of the photo, so everything seems in balance.

The same goes for other photos by Pääsuke or by other photographers from the early 20th century, but this aesthetic has remained even until now. Though we look at those pictures and believe to look at authentic history, what we're really looking at is a staged photograph, where the subject is asked to sit in enough light, tilt their head so their profile would look nicely defined and choose a spot to have the right kind of background behind them.
Kirjutas Piret Karro kell 9:05 AM