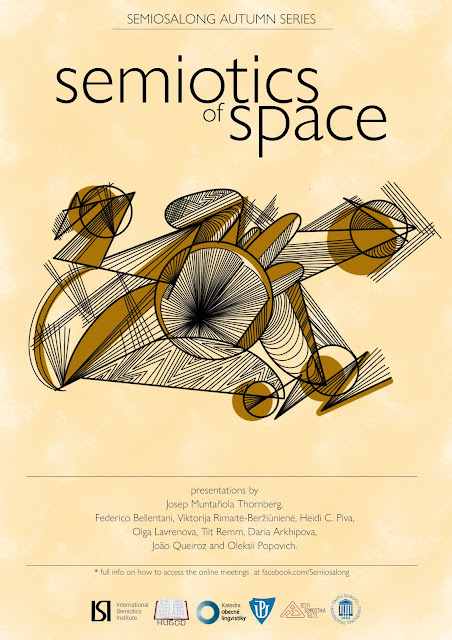 Does semiosis imply the existence of subjective space? What about physical space? Many have used the notion of space in a somewhat metaphorical manner, from Umberto Eco’s “C-space” to Juri Lotman’s “semiosphere”. Yet, if we are to talk about truly lived and everyday experience, space must be examined in a deeper way than just as a useful metaphor. Semiotics of space is concerned with communication practices on the ground and overlaps with urban studies, mostly through anthropology and sociology; but ‘inner space’ may also be interrogated at a more abstract level. Luis Prieto suggests that the identity of the personal subject depends on recognition of the non-subject – there is something which the subject cannot be, but brings it into being by negating the space of the subject’s own body. This non-subject body space becomes a terrain open to interpretation. The social semiotics of space emphasizes pragmatics, whereas Prieto’s linguistic semiotics of space is more concerned with syntactics and semantics. There are many ways to divide the inquiry, and there are numerous specialists in the semiotics of this topic, most notably for us the late Pierre Pellegrino – to whom this Semiosalong series is dedicated – but also a couple others who will speak to us during this series, about their current research. We invite all participants to reflect upon the abstract nature of subjectivity as well to engage with street-level social semiotics by joining us in the online space for the latest Semiosalong series, starting from October 27th, 2022.
October 27th: Grand opening of the International Semiotics Institute in Olomouc, and Josep Muntañola
November 10th: Heidi Campana Piva, Viktorija Rimaitė-Beržiūnienė, and Federico Bellentani Series description: Synécheia (συνέχεια) is a greek word meaning ‘continuity, continuous succession, order’. The word inevitably brings to mind the philosophical doctrine of synechism proposed by Charles Peirce, which expresses the tendency to regard things such as space, time, and law as fundamentally continuous. The most well-known implication of Peirce’s term is his rejection of Cartesian mind-body dualism. For Peirce, the physical and the mental are not separated in kind but plotted on a gradated spectrum of signs. Synechism also challenges the opposition of realism and idealism, but where semiotics falls in this opposition depends on who you ask. Sixties-era semiology was sometimes conceived as a critique of realism, whereas contemporary biosemiotics embraces so-called semiotic realism. The boundary between the one and the other blends just like in synechia, an ocular condition where the iris and the cornea seem to blend with one another, and the limits remain a matter of perspective. Yet, there can surely be a biological basis even for a general semiotics that embraces structural semiology with all its anti-realist implications. The series probes these blurred boundaries and will showcase a number of different approaches to the yet-to-be-defined general semiotics, which takes the basic continuity of signs as its primary interest.
March 10th: Anastassia Bondarenko and Jamin Pelkey
March 24th: Ivan Fomin and Pauline Delahaye
April 7th: Muzayin Nazaruddin and Timo Maran
April 21st: Joshua A. Bacigalupi and Oscar Miyamoto
May 5th: Jeremy Sherman and Vít Gvoždiak
Kirjutas Tyler James Bennett kell 1:19 AM No comments: 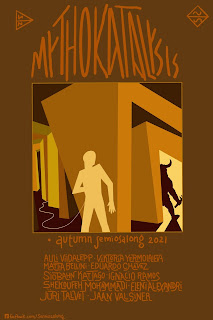 Series description: Mythokatalysis compounds the Greek μῦθος (myth) and κατάλυσις (catalysis). The Greek-French dictionary Le Grand Bailly offers, among other definitions, for the first: “expressed word, discourse”, and for the second: “action of dissolving, to destroy (a government), to end”. The title is inspired by the opening lines of Roland Barthes’ major work on the topic: “mythology can only have an historical foundation, for myth is a type of speech chosen by history: it cannot possibly evolve from the ‘nature’ of things.” Myth has an orthogonal relationship with ideology – ideology ‘naturalizes’ the cultural codes to the point of invisibility, where myth both precedes and undermines culture. Italian fabulist semioticians like Umberto Eco, Italo Calvino, and Roberto Calasso, wove images from mythology into synthetic works that simultaneously challenged culture and germinated new myths. The conception of myth in this way is like Janus of the Two Faces, the Roman god of duality, doorways, and transitions. Thus we are interested in both the appropriation of myth in subversive action, as well as the dissolution of myths which have themselves become naturalized. Mythokatalysis articulates contemporary social debates in which myth serves both progressive and reactionary agendas. We invite you to join our series, and to expect topics including colonialism and postcolonialism, politics of identity, symbolic violence, ideology critique, and others. 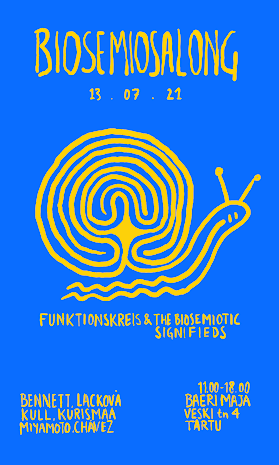 Six presenters, in-person offline event, one day only! Free of charge!
Session Theme: The prize of the object of biosemiotic interest, when properly understood, is coveted across disciplines. It promises answers to questions whose relevance goes beyond biology. What if biosemiotics could prove the utility of the arts and humanities in the same way as science, technology, engineering, and mathematics are proven? The biosemiotic signifieds however are mostly non-formalizable – the method is always changing. Biosemiotic findings can even be brought to bear upon issues today in digital humanities and media ethics, in identity politics and critical theory, and in stylistics and design for example. The only way toward these answers is through the dense knot of theory! The session is a pre-seminar for the upcoming Gatherings in Biosemiotics 2021, focusing on applications of biosemiotics to related fields, and inquiring minds from all backgrounds are encouraged to attend.
Program

Tyler James Bennett. “Notes on the natural history of ideology”

Ľudmila Lacková. “Law of nature, phaneron and relational logic: form and substance in Peirce/Peirce as the first semiologist”

Kalevi Kull.  “On the biosemiotic fundamentals of aesthetics”

Andres Kurismaa. “Revisiting von Uexküll’s rule: A place for the dominant in Funktionskreis and biosemiotics?” 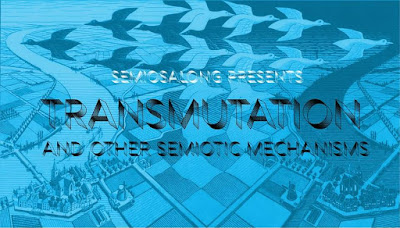 Series theme: A look into the everyday phenomenon of meaning creation might suffice to make us notice that meaning is often dependent upon more than one sign system. When we look at a movie, there are sounds, voices, music, images; when we speak with someone, there are gestures, there are pronunciations telling us where our interlocutor is from, there are hints telling us about her or his age; when we walk down the street there are signs that give indications to us by means of their shape, their color and their location. Every piece of information that we obtain from all the meaningful things we encounter every day is determined by the fact that each of these pieces of information are in fact signs belonging to different sign systems. It is thus interesting to ask, what kinds of relationships are established between sign systems? How is it that they can work together? Perhaps, one possible answer is that in addition to the possibility of expressing meanings in different ways, there are also meaningful units able to move from one sign system to another. Indeed, it might be so that there is a sort of permanent dialogue or negotiation between sign systems that allow us to make sense of the things we encounter every day. This, in its turn, might be seen as translation processes whereby a meaning gets transmutated as it moves from one sign system to another. It was Roman Jakobson who called transmutation this process of translating between different sign systems, but this is surely not the only way we can think about the relationships between sign systems. Accordingly, the aim of this Semiosalong series is to discuss, not only Jakobson’s concept, but all the other possible mechanisms and processes that lie behind the multifold interactions of the sign systems we use on our daily lives.

Here is the program for this semester:

14th May, Elli M. Tragel and Herman A. Tamminen

Series theme: Nowadays, Peircean semiotics has a strange hold on the Latin American mind, but this is not the only semiotics that happens in Latin America. The Saussurean revolution of the mid-20th century left strong traces in the subcontinent that were carried back to Europe and elsewhere by the Latin Americans escaping from the then rising dictatorships. In this climate, Latin American semiotics was born as an act of resistance; as a revolutionary practice. The following decades brought some important changes that impacted on both the region and the discipline. The second half of the 20 th century saw the institutionalization of semiotics, and with it, the tension between semiotics as a critical thinking tool and its assimilation by design and marketing programs. Yet, these seemingly opposite tendencies are of crucial importance for the dynamicity of the discipline. This adds up to the many contradictions, different points of view, and internal forces that have shaped semiotics in Latin America into an ever changing and vibrant field. The present series will dwell on the kind of semiotics specific to the region (even in the cases when it was developed abroad), from its beginnings in the 1950s to its later developments at the turn of the century. The presentations will give a glimpse of the vast landscape of Spanish and Portuguese speaking semiotic research, given that today the Latin diaspora in semiotics reaches even as far as our beloved city of Tartu.

Series Theme: Discussions about conflicts often revolve around two main questions: how to solve them and how to avoid them? Despite our often fearful and negative attitude towards them, conflicts play an important role as a dynamic force in the world around us and thus deserve a more multifaceted approach. The semiotic viewpoint offers an interesting insight and allows us to observe conflict as a universal mechanism of meaning generation. In turn, conflict presents one of the most fruitful research objects for semiotic inquiry. It is in the moment of conflict where everyday life routines lose their automaticity revealing different meaning structures and making the semiotic nature of our reality apparent. The autumn Semiosalong 2019 aims to bring these two perspectives into dialogue with a series of lectures addressing various contexts – cultural, social and environmental with the aim of gaining a deeper insight on the nature and function of conflicts.
Session 1: November 13th, 2019
Elo-Hanna Seljamaa “Communities of Conflict on May 9 and beyond”
Alin Olteanu “Killing in the name of... culture”
Session 2: November 20th, 2019
Andrey Makarychev and Alexandra Yatsyk “Semiotic Facets of Bare Life and Biopolitical Othering: Estonia and Beyond”

Andre Uibos “On time and conflict: a semiotic view”
Session 3: December 16th, 2019
Nelly Mäekivi and Riin Magnus “Conflict-free life: Relations between the European mink and local people”
Joonas Plaan “Who owns the sea and its resources? Human-seal interactions and conflicts of meanings, practices and knowledge”
Kirjutas Tyler James Bennett kell 4:12 AM No comments:

The Semiotics of Space series is ongoing through December 2022! Follow the Semiosalong facebook page for the link!